The MuppetsHenson Poll is up for you to vote on. We have 2 Poll questions this time. One pertains to "Jim Henson's The Dark Crystal Age of Resistance" and the other on "Muppets Now" airing on Disney+ this summer. Let us know your thoughts. The Poll can be found near the top of the right sidebar.

The following is a great article by Chris Barry of MousePlanet.com about the book 'Imagination Illustrated: The Jim Henson Journal' by Karen Falk. He worked with Jim and Jim Henson Productions in NYC for a time. It is always nice to read of another person's perspective/experiences of Jim Henson and how it has enriched their life.  Enjoy!
- Brian
Muppet Stuff -
Imagination Illustrated: The Jim Henson Journal
Welcome back to Muppet Stuff, my occasional foray into that Muppet stuff that we all love so much.
Unfortunately, I can't say that I really knew Jim Henson. I can, however, say that I did proudly work for his company. I can say that I had one of the greatest 20-minute conversations of my life with him in his New York City office just a few short days before he died. While working for the company, I did get to see him performing Kermit the Frog on set. I've often paraphrased a quote from some rock and roll reviewer whose name I apologetically can't remember. He said, "Watching The Who's Pete Townshend strum the opening notes to Pinball Wizard was a lot like watching John Hancock sign his name." Well, watching Jim Henson fit his hand into that lifeless green piece of felt and bring Kermit the Frog to life right there on the set in front of me was quite the same type of experience. It would've been great to see the expression on my face.

Given these few privileged Jim Henson moments I've had in my life—and given the films, TV shows, documentaries, and books that I've delved into regarding his life and work, I do feel like I know him in a way. We tend to feel that way about our idols. We admire them and immerse ourselves into everything we can find out about their lives in search of a certain sense of intimacy. We want to know them. I want to know the names of Jerry Garcia's guitars and where the apartment in Asbury Park was that Bruce Springsteen shared with lifelong E-Street Band mate Steven Van Zandt in 1966. Knowing how they lived, understanding how they thought, and peeling away the layers of the onion to find out more about them is important to us. Most of us here at MousePlanet, readers and writers alike, have probably begun a sentence with the words, "If Walt were alive he would probably…" Finishing that sentence is, by all accounts, virtually impossible. None of us really know what Walt Disney would have thought about anything, but we get so close to these people on some plane of existence that we feel that we can unabashedly and justifiably complete statements like that.

When a new book, or film, or even a little tidbit of information comes out about our heroes, we snap them up and add them to the complex puzzle that is their lives. Such is the case with a wonderful new acquisition of mine, Imagination Illustrated: The Jim Henson Journal. The front cover of Imagination
Illustrated: The Jim Henson Journal

Recently published by Chronicle Books in October of 2012, the book was edited by Jim Henson Company archives director Karen Falk and features a foreword by Jim's daughter Lisa Henson. Many of us familiar with Jim Henson lore have known about his infamous "red book." The red book is just that: a red diary that Jim began to keep in 1965. In it, he documented his rise, his productions, his ideas, and significant events both in his professional and personal life. The journal is a timeline of single line entries spanning from 1965 through 1988. In recent years, the Jim Henson company has begun posting pages from the red book online and in a blog.

What writer/editor/archivist Karen Falk manages to brilliantly achieve with Imagination Illustrated is to pull these entries from the red book together and marry them with photographs, doodles, drawings, storyboards, and much, much more that pertain to any particular entry, all of it culled from the massive Henson Company archives. For example, an entry from 1966 dated "around March 21" reads:

On the same page there's a script for one of the IBM films written by the great Muppet writer Jerry Juhl, two storyboard panels from the IBM films, and a photo of a young Jim and a guitar that he hand-decorated for Rowlf to use in the films. It's a masterful job and makes for one of the most informative books about the man that has ever been published. Kudos to Karen Falk on this massive undertaking.
Page after page highlight Jim's remarkable rise from the early days of The Jimmy Dean Show, to Sesame Street, on to the mega-success of The Muppet Show and beyond to Fraggle Rock, The Dark Crystal, Labyrinth, Storyteller and everything imaginable in between. It's an astounding collection of photos, drawings, concept art, magazine covers, letters, and so much more chronicling the life of our favorite quiet genius. Some things are very official looking and others are obviously rough sketches on yellow loose-leaf paper. Here are some of my favorite pieces from the Henson archive that are included in the book.
The book is full of early versions of most of your favorite Muppet characters. It's great to see the evolution of some of the most recognizable Muppets. These are early rough sketches of Kermit the Frog: 1950s sketches of Kermit the Frog Oscar the Grouch seen here in magenta
without his trash Henson was so instantly linked to his puppets that most people don't know that he delved into other types of projects as well. I remember digging through boxes of footage during the making of The Muppets Celebrate Jim Henson and coming across the NBC protection master of The Cube, a 60 minute live action show that Jim directed and co-wrote with Jerry Juhl. I'm quite sure most fans have no idea that Jim ever did anything like this obscure comedy that according to billing, "dramatizes the complex, baffling problems of reality versus illusion." Production stills from The Cube

Something I wasn't even aware of was Jim's work on what the book refers to as a "dome shaped multimedia nightclub." Guests would experience music synched with different images on projection screens. They even scouted and shot footage of landscapes, waterfalls, and traffic and baseball stadium crowds to be used in the projected images. It was ultimately shelved as Jim moved on to other projects. Pages of Jim's notes about The Dark Crystal

Here's something that you'd never get to see outside of a book like this—a drawing given to Henson by the great Orson Welles after his cameo in The Muppet Movie: Here's some designs for what would eventually become Waldo, the digital puppet from Walt Disney World's Muppet Vision 3D: The journal entries help paint the picture of the man in many different ways. There are so many that contain dates of importance in his career like appearing on Ed Sullivan or The Tonight Show. You can see when he started having meetings with The Children's Television Workshop to discuss Sesame Street or when filming of The Muppet Show began in London.
There's something here for everyone. We Disney fans can see that Jim shared our love of the Disney parks. A 1960 entry has him on his first trip to California, and spending time in, where else but—Disneyland. In 1975 there's this entry:


"May 20 Empire Strikes Back opens in London. Yoda a big hit."

I could go on and on, but some of the entries I love best are the ones regarding Jim's personal life. There are notations about his children being born, traveling with his wife and kids around the world or the family moving to Greenwich, CT. It's the juxtaposition of family man and media mogul that paints the most interesting picture to this reader. I love the list of entries from 1972 that includes the following:

Jim Henson was a visionary, a one of a kind artist that forever changed the world and all of the mediums that he worked in. But, he was also a dad and a husband and a car enthusiast and at times… and I'm so blessed that I actually got to experience a little bit of this firsthand… a bit of a goofball. During my brief conversation with him that day in his NY office, he kept playing with this little noisemaker. It was a plastic tube and when you tilted it one way something inside slid down the tube and made a funny descending noise and when you tilted it the opposite way it slid back and made an equally funny ascending noise. It was a simple, silly little thing made to put a smile on a person's face. Yet here was this man, this entertainment mogul, and this creative genius spending a few moments chatting with an intern and playing with some cheap dime store toy and quietly, sort of giggling to himself. It was such an incredibly real moment that I'll never forget. To me, it spoke volumes to the kind of man that he really was.

Unfortunately, moments like that were taken from us when Jim Henson passed away on May 16th, 1990. You can't sit there with Jim in his office and watch the creative giant act like a goofy kid, but you can read Imagination Illustrated and get a closer peek into the fantastic worlds that he created and left behind for all of us to enjoy—and while you're at it catch a glimpse of who this man really was. It's a must-have for us fans, and for that matter anyone else that would like to come in for a closer look at one of the most visionary men of our time.
Posted and/or Written by MuppetsHenson at 11:50:00 am 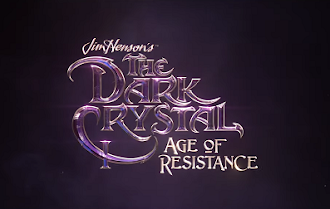 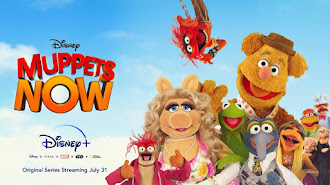