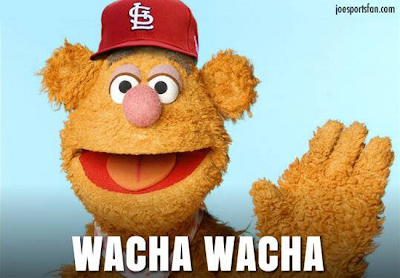 Among fans of Major League Baseball and the St. Louis Cardinals, especially, the buzz for right-hander Michael Wacha began the moment they drafted him in 2012. He was a sharp-looking prospect and all, but that wasn't it.


"His name is pronounced how? 'Wocka'? Wocka, wocka!" Just like Fozzie Bear of Muppets fame, who fancied himself a Vaudevillianstand-up comedian.

Approached on Thursday afternoon in advance of the National League Championship Series regarding the relationship his last name has to the No. 3 Muppet after Kermit the Frog and Miss Piggy, Wacha semi-reluctantly played along.

"Yeah, I’ve definitely experienced that," the 22-year-old Wacha said of the "Wacha, Wacha!" thing. "In college ball, going on the road in college. And definitely the last start in Pittsburgh. I’ve gotten used to it now."

Wacha does not sound like he watched "The Muppet Show" growing up.

"Didn’t watch 'The Muppets,' not much of it," Wacha said.
Not long after John Axford came from the Brewers, the story goes, he teased Wacha by finding a video of Fozzie Bear saying "Wocka, wocka!" and playing it over and over again. It might be fun for fans and select teammates — hey, it's addictive to some of us — but the whole "Wacha, Wacha!" thing seems played out to Wacha himself.
"It's just a thing that you have to accept," Wacha said. "It’s something that’s going to happen, so you might as well get used to it."

He might even roll his eyes a little whenever somebody does it.
"Just a little," Wacha said.

What about giving us a "Wacha, Wacha!" yourself, Michael?

"Wacha, Wacha," he said, without exclaiming and after hesitating.
Hey, he played along. Pretty much.

Wacha seems to take "Wacha, Wacha!" like New York Mets legend Darryl Strawberry, who was confronted with derisive "Dar-ryl, Dar-ryl!" chants — sometimes by his own fans, if memory serves. But "Wacha, Wacha!" said in rapid-fire cadence, should be considered support or encouragement. It's at least neutral. (Really, it's just an excuse to go "Wacha, Wacha!")

It's kind of like a nickname, as well. The nicknamed person doesn't really get to pick it. As long as Wacha's public wants to keep "Wacha, Wacha!" alive, it'll happen. And by the looks of how Wacha has pitched so far, the man and his catch phrase are going to be linked for a long time.

Wacha gets the start in Game 2 of the NLCS against the Los Angeles Dodgers on Saturday. Even if you don't root for the Cardinals, give him a "Wacha, Wacha!" sometime before the first pitch. It will get you psyched up for the game. And maybe to see "The Muppet Show."