The Muppets' Statler and Waldorf Review This Year's Oscar Nominees 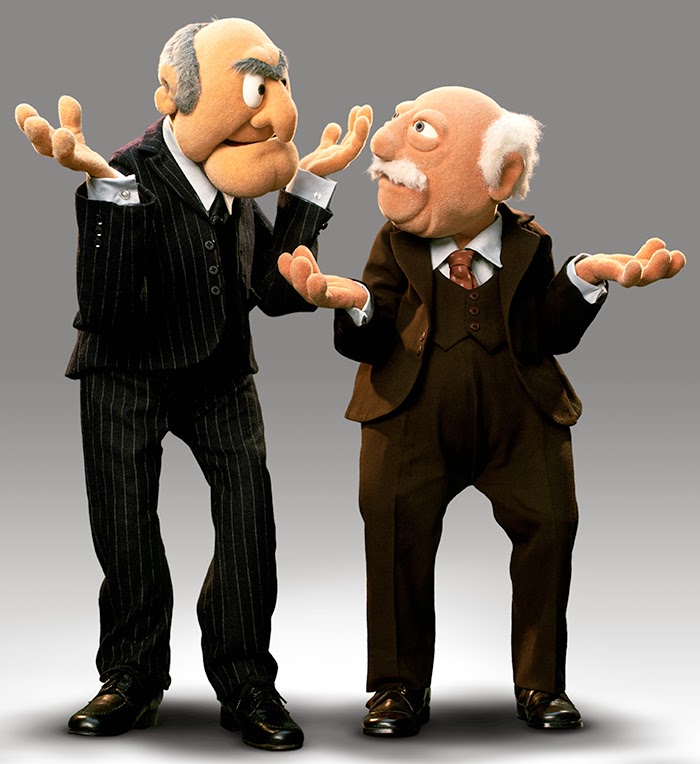 
The world's greatest critics, Statler and Waldorf of the Muppets -- and of the new movie Muppets Most Wanted (opening March 21st) -- offer their inimitable reviews of the nine Oscar "Best Picture" nominees.

American Hustle
STATLER: Great movie! Great cast!
WALDORF: And a great decade -- the 1970s.
S: Yeah, that movie took me back to when we were young.
W: We weren't young in the 1970s!
S: Oh darn, I must've been watching Jurassic Park again.

Philomena
S: A woman goes looking for the child she gave away at birth. I have only one word to say.
W: What's that?
S: Mama!

Captain Phillips
W: Tom Hanks is incredible in this true story of bravery on the high seas.
S: Not only does he survive an attack by pirates, but he does it without taking Dramamine.
W: You sure this is a true story?

12 Years a Slave
S: A powerful motion picture.
W: Reminds me of our years with the Muppets.

Nebraska
W: An old guy played by Bruce Dern thinks he's won millions and heads cross country in search of his reward.
S: Heck, I'd leave here for a buck fifty.
W: Bruce Dern is great as an old guy.
S: Old? I've got socks older than him!
W: Yeah, and you might try washing 'em once in a while.

Her
S: A guy falls in love with his phone's operating system. Unbelievable!
W: Can you keep it down? I'm trying to have a quiet moment with my cell phone. Now where was I? Oh yes: I love it when you ring and vibrate.
S: Help!

The Wolf of Wall Street
S: I've never seen anything like this movie. It was wild, rude, salacious, vulgar and totally indecent.
W: You hated it?
S: You kidding? I can't wait to see it again.

Dallas Buyers Club
W: Matthew McConaughey is incredible in this movie.
S: I haven't seen this one yet. Do the Cowboys win?
W: It's not a western.
S: I know that. I was talking about whether the Dallas Cowboys football team won.
W: It's not a sports movie, either.
S: Oh...Well, then what is it about?
W: Oh, about an hour and a half.Oh-ho-ho-ho!

Gravity
S: Sandra Bullock trapped, running out of oxygen, floating away into nothingness.
W: It was very scary.
S: Reminded me of us watching The Muppet Show.
W: Not that scary, but close.

The 86th Annual Academy Awards air March 2nd at 7 p.m. on ABC
Posted and/or Written by MuppetsHenson at 1:22:00 pm