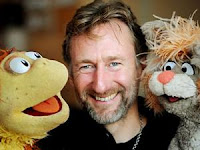 Andrew Blair (Den of Geek) reports back on Brian Henson's session at the Edinburgh International Television Festival, on the evolution of puppetry...

That Puppet Game Show is the unlikely combination of B-list celebrities and new creations from the Jim Henson Company. Brian Henson, director of modern classic The Muppet Christmas Carol and 'How to Introduce the Unique Stylings of Tim Curry to children' (aka Muppet Treasure Island), is a puppeteer on the show, and as such was around to give a presentation at the Edinburgh TV Festival about the history of his father's creations.

So, first of all, Brian Henson was in the room. This was very exciting. I mean, he's Brian Henson. The guy Exec-Produced Farscape.

Starting with a rare clip from a 1956 episode of Sam and Friends (featuring a pre-recorded back projection and the then non-gender-or-species specific Kermit puppet), Brian Henson documented his father's approach and the stylings that set it apart from other puppet shows.

Jim Henson preferred to think of the TV as a stage, as exemplified by the clip shown. In it, a character appears on television while stuck on a loop, and two viewing Muppets comment on this before the camera zooms slowly towards the screen. Then Sam and Kermit begin miming to a song (Kermit in a wig, as he was miming to female vocals). This clip demonstrates a technique that Henson and That Puppet Game Show puppeteer Dave Chapman showed live: as on a stage, the characters can more easily break the Fourth Wall, addressing the audience directly. 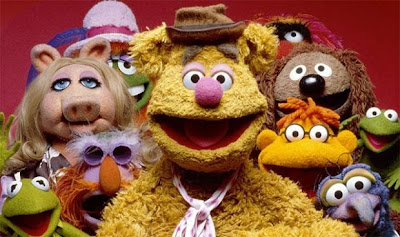 Performers are trained to know where their character's eyeline is in respect to the camera, so that they can address the viewer directly. There's an element of realism that comes from this. Despite the Muppets' appearance, they don't do anything as jadedly wacky as appearing from above or below screen, walking across it as if it were a stage, and in some cases performing an exacting degree of lip-sync. By involving their audience as if they were performing live, it makes them feel more solid and real.

Conversely, with Muppets being all manner of creatures, there's no sense of human preconception. If a new character appears, you genuinely have no idea what it's going to be, and people don't know how to react. Interestingly, Brian Henson notes that on top of this, his father rarely utilised the nuclear family setup, instead opting for the family of friends approach. There's a subtle critique of societal attitudes and the damaging effect they can have, achieved through the medium of a Rat and a Whatever hanging out together and occasionally narrating classic literature. Who knew?

Brian Henson also discussed the technical aspects of the puppets and the production. Demonstrating both one and two-handed puppets, and showing some behind the scenes clips from The Muppet Show, Dark Crystal, and Labyrinth, there's an insight into the constantly evolving technology that the Henson Company has used in its puppetry, as well as the personalities of its actors. Did you know, for example, that one of the reasons Swedish Chef works so well is because Frank Oz is operating both arms? 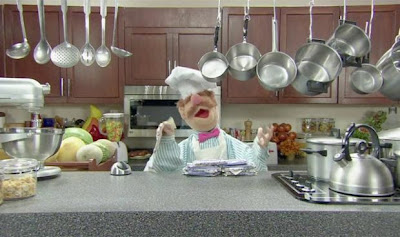 Having been asked to do both hands (usually it'll be two puppeteers operating separate hands, leading to incidents when the more experienced hand can occasionally be seen restraining the other), something unusual for one of the lead puppeteers, Oz responded by moving faster than Jim Henson (operating the rest of the Muppet) could cope with, so the character's hands continually led the rest of him around the room, by which time they'd moved onto something else in a different direction (Hence the physical unpredictability of the Swedish Chef. The voice came from Jim Henson's love of gadgets, and listening to a tape called 'How to Speak Mock Swedish' after purchasing an early cassette recorder and microphone for his car).

Even in the Fifties, Henson was utilising technology to achieve his aims. With two puppeteers he managed to create a skit with three characters interacting, and by the time of The Muppet Show specially constructed sets are matched with composite shots to complete a sketch involving pig vikings singing In the Navy (while, in the background, a man in a three piece suit operates the wind machine). When you think of the difficulty of making shows with the Muppets, most people's thoughts head towards the puppeteers. Spare a few for the effects teams behind some of the more outlandish offerings their Seventies ATV show offered.

As technology advanced, so did the Muppets themselves. Aughra from Dark Crystal is shown with wires trailing from her, like an unfinished dress. Little Shop of Horrors required three months of rehearsal time for two of the songs alone, and featured up twenty-five puppeteers. By the time of Labyrinth, Brian Henson was able to operate the character of Hoggle wirelessly with four other operators. Apparently the reason Hoggle makes occasional harrumphing noises is because Shari Weiser – the actor inside the costume – had to have it redesigned as it was causing her pain. This meant that she could only see through a hole in the mouth. As a result, Hoggle occasionally makes noises for no apparent reason, but in reality this was to prevent Weiser from acting the role blind. 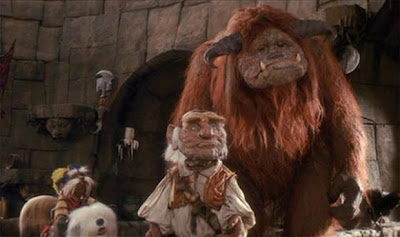 Advances in servos meant one performer could control an entire creature, and this was the case by the time of the first Teenage Mutant Ninja Turtles movie, and the TV series Dinosaurs. Even then, Jim Henson was experimenting with real time computer animation based on a puppeteer's motions. This was used in recent shows such as Sid the Science Kid. Clips from both eras show a sublime mix of engaging factual content and family friendly jokes that work on several levels. What this style lacks in finesse, it makes up for by capturing spontaneity (something key frame animation takes a lot of time and money to mimic).

Obviously the Muppets are brilliant. This talk, delivered in such a low-key way about such an evocative family legacy, reminded me of this, but also plugged into the same part of my brain that whirred and purred during Pacific Rim. The part that watches Thunderbirds and goes 'I don't care if Thunderbird 2 is the least aerodynamic thing since Mr Creosote, it truly is a thing of beauty'.

Not only is his stance behind the inclusion of the song The Love is Gone in Muppet Christmas Carol entirely laudable, but now Brian Henson has me appreciating the technical genius behind the Muppets too.

Posted and/or Written by MuppetsHenson at 5:03:00 pm