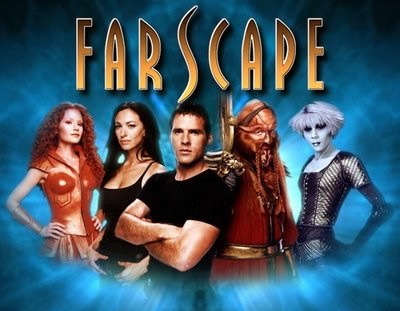 Sydney-based Justin Monjo is writing the screenplay for "Farscape", a movie spin-off of the sci-fi series that ran on the Nine Network and the Sci-Fi Channel in the US, for Jim Henson Productions, to be directed by Brian Henson.

Monjo was one of the writers on "Farscape", which ran from 1998-2002, followed by the 2004 miniseries "Farscape: The Peacekeeper Wars", co-produced by Jim Henson Productions and RHI Entertainment.

In the finale, the protagonists, American astronaut John Crichton (Ben Browder) and peacekeeper Aeryn Sun (Claudia Black) got married and had a baby. In the movie, it’s revealed the boy had special powers which made him the target of the villainous aliens so his parents hide him on Earth.

The plot follows the kid at the age of 19 when his whereabouts have been discovered and he rejoins his parents on their spaceship. Monjo says the film would be shot in Australia.
Posted and/or Written by MuppetsHenson at 6:48:00 pm