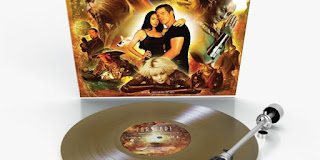 Releasing in Barnes & Noble stores for their #BNVinyl Weekend 2019 and online July 12th, the 11-track album is a collector’s dream – pressed on limited edition gold vinyl, with artwork by famed illustrator Joe Corroney (best known for his art in comic books for the Star Wars, Star Trek, X-Files, True Blood, Doctor WHO, and Marvel franchises), including a collectible poster insert with an impressive character spread.

The album, also available on all digital platforms on July 12th, joins a year of anniversary celebrations for the popular Farscape series, including full series availability for streaming on Amazon Prime Video and a fan event on the historic Jim Henson Company lot in October.