An Evening with Deet- um Brian Froud by KingRichard76

As I write this, the Dark Crystal Age of Resistance was released on Netflix two weeks ago today, this piece isn't so much a review of the series itself - as there's simply oodles of reviews all been written by many within the last two weeks - this blog is simply a LOVE letter to all those who worked on this wonderful production, from Brian, Wendy and Toby Froud, performers like Louise Gold, Beccy “Deet” Henderson, and all those who worked in unison to keep the legacy of Jim Henson both indelible and perpetual.

Having been born in the mid seventies, and a child of the eighties I- like many, grew up with Jim Henson's finest creations the Muppets, it was in 1986 that I saw Labyrinth and when I first saw Hoggle I actually thought it was a small actor with plenty of prosthetic make up - was only when I saw the documentary Inside the Labyrinth that I realised it was a small actor (Shari Weiser) but wearing an animatronic head, so in effect a puppet, during the documentary the writer Terry Jones (of Monty Python fame) spoke about how when he first saw the Empire Strikes Back spoke about when he saw Yoda and thought it was a little man because of the way his ears/eyes moved and couldn’t believe it was a puppet.

Over the years with technology advancing the way it has anything is possible when it comes to film making, dinosaurs walking the earth, the Titanic sinking, Avengers assembling, Paddington Bear enjoying the sights and sounds of London, Yoda whooping Christopher Lee’s butt in Attack of the Clones, the amount of cgi used in this day and age seems to be in every single production…

Back in 1982 Jim Henson brought to the screen The Dark Crystal, a fantasy adventure inspired by the amazing artwork by Brian Froud (conceptual artist on both Dark Crystal and Labyrinth) directed by both Jim Henson and Frank Oz, many of us grew up with this film and it was unique that it was a major motion picture where every single character was a puppet, and you could tell they were puppets, that each movement, each expression was created by the performer either performing below the camera frame or actually within the puppet itself.

When you think of Dark Crystal and Labyrinth, one of the first things that come to mind are the wonderful and beautiful designed characters, all who were created and designed by the wonderful conceptual artist Brian Froud.

Last week, almost to the day that Dark Crystal Age of Resistance was released those wonderful people from SFX magazine here in the U.K. organised a wonderful event, billed as an evening with Brian Froud, which saw us first seeing The Crystal Calls, the making of Dark Crystal Age of Resistance, then a Q&A with Brian Froud himself and then an exclusive late night entry to the exhibition which boasted actual puppets, costumes etc from the show itself.

It was a very wonderful experience, being alongside a plethora of other Muppet fans who grew up watching the World that both Jim Henson and Brian Froud created, my two good friends, Bunny and Nicola were there and excitedly spoke about what episodes we were on, its almost as if overnight this has become a global phenomenon.

Fans of all ages made their way up the steps to NFT3 and hurriedly rushed down the steps to get as front to the auditorium as possible, myself Bunny and Nicola being first in line were right at the front, everyone was chatting excitedly knowing we were going to be in for a real treat… The door right by the stage opened up and Mr. Brian Froud walked in followed by a round of applause as he did so, he took his seat and shortly the nights enjoyment began.

First on the agenda was seeing the Crystal Calls, the making of the dark crystal, which is a superb documentary, one of the moments in it that sticks out for me was an early piece of test footage that showed a practical puppet Skeksis of the Scientist with a fully cgi gelfling, straight away I winced and as much as I have a great deal of respect for the cgi artistry, many of us from an earlier era was enthralled by seeing actual puppets and we fell in love with them.

Within the documentary we saw how many of the production crew weren’t that happy with the marriage of both practical puppetry versus cgi characters and went with the route of practical- and in my opinion this was one of the many reasons Dark Crystal Age Of Resistance has become such a big hit both for those of us who grew up on the original and those newcomers who have been fed a large dose of cgi over the years.

It was lovely seeing a huge emphasis of the documentary showcasing the performers, everyone from long time Muppet veteran Louise Gold who not only worked alongside Jim Henson on the original Muppet Show but also worked on the original Dark Crystal, then of course theres the lovely Beccy Henderson who performs (in many peoples opinion) the star of the show, the very lovely Deet, she with a sunny disposition and positivity running through her essence, theres Olly Taylor, Kevin Clash, Nick Kellington, Helena Smee, Warwick Brownlow Pike, Victor Yerrid all terrifically wonderful performers.

This was a terrific in-depth documentary and at an hour and a half was really informative, and showed Brian (in between drawing), Wendy and Toby Froud talking about their roles on set, then some of the voice actors themselves talking about their love for the original film and how dedicated they were to their roles, the performers both rehearsing intricate scenes, how Director Louis Letterier would be filming the puppets up close and personal with a Steadicam whilst rushing through the set. Was also fun seeing how the performers got into the Skeksis costumes.

After the documentary, Brian Froud went to sit down on the stage with the host and a half hour was dedicated to Brian being asked questions about his work and the Dark Crystal, he spoke with great eloquence and am sure many if not all in the room enjoyed what he had to say. It was then opened up to questions from the audience, I was able to ask him if he thought the tv show would have lived up to and surpassed his expectations. Brian gave a wonderful answer and if anything it shows that all those who worked on the tv show, definitely did it out of Love and respect for the legacy that Jim Henson had begun several decades earlier.

After the q&a and Brian receiving a well deserved round of applause, myself and Bunny made our way to Brians table to meet the man himself, it was a great moment when he signed my Deet popfunko #Winning and my Dark Crystal novel, he kindly posed for a picture holding my goodies, once out of the line I saw three friends I’ve made from being a Dark Crystal fan, Rob Turner, Sarah Jane Wilson and Zainab Mirmalek.

After exiting the screening we then lined up to go inside the exhibition itself which had a number of wonderful pieces from the show, different props, creatures from Thra, there was even a booth where you could record your own voice over to be played into one of three selected scenes (those who heard me do a voice over for the Chamberlain must have thought ‘Well, sounds like he needs to be on a higher dose of medication.’) it was fun to do, we then got to be by the Crystal of truth itself, then join the Chamberlain for a wonderful (if not crawling feast).

Then I got to meet the (in my opinion and seeing the amount of love for this character on the internet) true star of Dark Crystal, the lovely gelfling from Grot herself, Deet/Deethra who mark my words will be the number one gift under many peoples Christmas (sorry Bunny for using the c word lolz) trees this year.

By now, I expect everyone has seen all ten episodes (even so I’ve done my best to avoid posting spoilers), I know that there are many who are on their sixth or seventh re watch, and just watching the first episode its easy to see why, we aren’t seeing state of the art cgi characters, we are seeing puppets, actual puppets, they look like puppets, they move like puppets and its that which instantly takes many of us back to a more simpler time, you become invested with the characters, their story is your story, and you go on the journey together… Here's to season two *Coughs* season three *Coughs* Netflix, and *Coughs* for Dark Crystal Age Of Resistance to be released on both Bluray and DVD!

And on that note, this is in “Essence” hmmmm, a love letter to Jim Henson and all those wonderful people who continue to this day to perpetuate his immortal legacy x

And of course to the memory of Jim Henson. 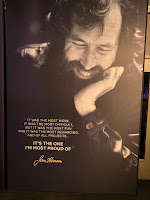 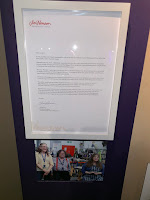 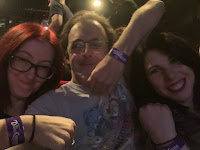 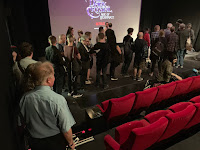 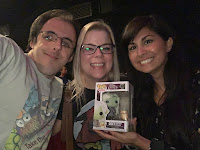 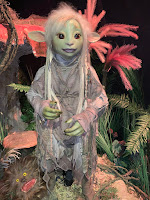 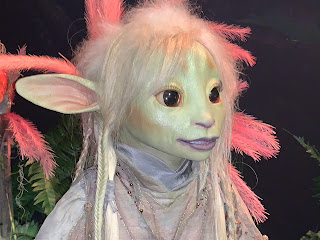 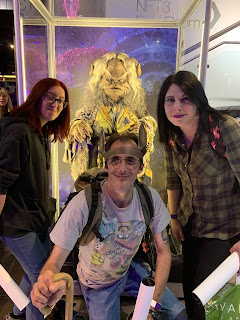 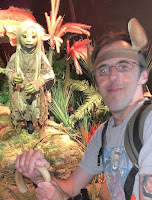 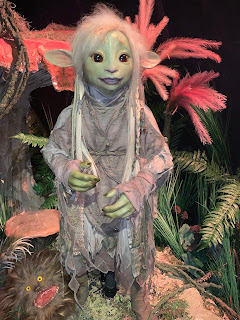