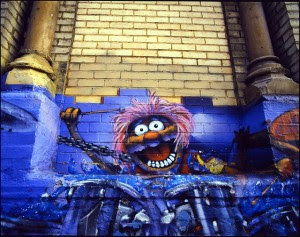 Shooting on the next Muppet movie took place in London on Wednesday with the Freemasons' Hall in Covent Garden stepping up as a grandiose if unexpected location.

It’s hard to guess what Kermit & Co might have to do with the mysterious masonic monolith, though the plot of The Muppets...Again! is said to involve a world tour stopping off in London, Berlin and Madrid.

Starring alongside the Muppets themselves will be Ricky Gervais and Tina Fey.

Over the last few days the building has been covered in lighting rigs as the crew took shots at the main entrance and inside the building, while “vans full of costumes” were seen outside.

Whether a secret handshake was necessary to secure permission to film in the hall is not known. It is clear, however, that it has a special attraction for film people: last July it hosted the after-party for the premiere of the Dark Knight Rises and before that it was used in Guy Ritchie’s Sherlock Holmes.

Posted and/or Written by MuppetsHenson at 7:32:00 am